We’re the heirs to the glimmering world

I think it’s taken me so long to write about Wildflower 2014 because Wildflower is never just a race. It should be everything I hate: I don’t like crowds, or camping, or drinking when I can’t drink because I have a race the next morning and shut up you stupid kids, isn’t it time for bed? And even in the immediate days and hours before, when I’m checking the forecast to see how damn hot it’s going to be or dreading the drive or remembering I need to find a tent to borrow, I hate it a little. Why can’t I just do a race where I sleep in a bed the night before like a normal human being?

But then I get there, and I’m in some kind of weird magic camp where triathlons are normal and people are exceeding their expectations of themselves and everyone’s smiling, and I feel a sense of community I don’t get many other places. Maybe it’s the beer. Maybe it’s the generous coating of dust that settles on everything. Maybe it’s the shared knowledge that you are about to do something totally dumb with a few thousand strangers who also thought sleeping on the ground and then exercising strenuously for a few hours and then hauling several pounds of gear up a hill before sleeping on the ground again would be a capital way to spend a weekend.

Whatever it is, I keep going back.

Last year at the finish line I fell hard for Wildflower. This year, I resolved to go back and do it “right” — meaning, arrive early (vs. slipping in just before the close of packet pick-up on Saturday, my usual M.O.), race on Saturday, and cheer my brains out on Sunday. I had no interest in tackling the long course myself, but if I was going to bike 160 miles I might as well try to bike 56. A relay team formed, fell apart, formed again; enthusiasms rose and fell along with the water levels in the lake (well, actually, the water levels just fell); and finally, come late April, I knew I was showing up at Lake San Antonio on the first Friday in May as the biker on a relay team better known as There Better Be a Swim. 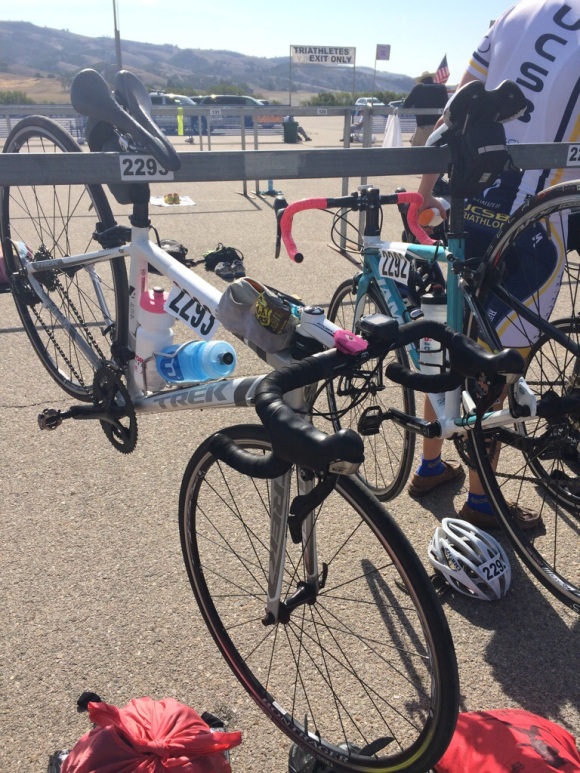 Perhaps my priorities were misplaced.

We’re the heirs to the glimmering world

It became a joke: How many times did I cry during Wildflower weekend? “All of them,” I would say. “All of the times.”

But the first time was a few miles into the bike course, after the sweat-fest of Beach Drive, after the turn out of the park. There was this big farm — ranch? — parcel of land of some sort, anyway. And there was a long driveway leading from the farmhouse to the main road, and at the end of that driveway sat an older couple in camp chairs, ringing their cowbells.

Snuffling behind my sunglasses. Singing The National in my head. Legitimately moved by all the little things. That’s my Wildflower.

For the first 30-35 miles, I honestly had the best bike ride of my life. I wish I had data from when I rode the Olympic course in 2012 to compare, but I don’t need to see numbers to feel my progress. I was skipping up the hills and sliding down, leapfrogging with a sweet Team in Training rider, waiting for a couple of friends I’d passed on Beach to catch back up to me on the straightaways. (50+ men, all of them, always: my true racing age group.)

It was hot, but I was handling it, dousing myself with a full water bottle at every aid station. Each time I’d start to flag, it seemed there were volunteers right there to revive me with a fresh bottle of cold water. It absolutely helped that I was just doing the relay, and a few times, I felt like a jerk: Yeah, I’m riding hard and passing people, but I’m also just doing this; I didn’t already swim and run and I’m not about to run again. This is my whole race. I better push it.

My team had asked me my predicted time, so they could be back in transition to meet me. I rode 3:55 with plenty of untimed stops on a cooler day at our training weekend, so I thought around four hours would be right. But when my runner came in for the handoff on race morning and confirmed, “four hours?” I for some reason said “3:30.” That would be a crazy time for me. That would only be five minutes slower than Vineman on a course with 1200+ more feet of climbing. It would make no sense. But for the first 30 miles of the bike course, I thought I might pull it off.

Hey love, we’ll get away with it
We’ll run like we’re awesome

I didn’t make that particular crazy goal, and it shouldn’t have been a surprise, because the first 40 miles of that course is an easy flatland jaunt compared to the final 16.

The issue wasn’t really Nasty Grade. I was prepared to be slow on Nasty Grade, and I was, basically losing in five miles all the time I’d spent banking in the previous 40. What really got me were the five miles immediately after, heading back toward the park. It’s yet another place where I think the Wildflower conventional wisdom hides the real issue. It’s miserable climbing up a 900-foot hill for two miles? No shit. Everybody knows that. Nobody talks about the fact that after you come down the screaming descent, you spend the next several miles losing all that momentum you worked so hard to gain by climbing a substantial portion of the way back up.

(Other examples where Wildflower’s conventional wisdom lets me down: It’s not the heat, it’s the dust; it’s not the race, it’s the climb up the dirt hill with all your gear after.)

I should have known how awful that part would feel; I’d ridden the course before. What I didn’t appreciate is that on that course preview day, I was having a terrible ride — period. It was windy; I’d wanted to quit a bunch of times. At some point, though, I’d managed to pick up a few friends riding similar paces, and we’d groaned and chatted our way through the final 10 miles. It felt bad, but so had everything, that day.

On race day, things had felt great, so I was unprepared for the final push to feel like such a slog. I went from smile-crying and thanking every volunteer to groaning and trying not to make eye contact. But once we were in the park, the hills to the finish didn’t seem as bad as I remembered, and I whipped down Lynch and into transition so fast I could hardly believe it was over.

And then we failed to catch our runner with the crocodile hats, but that’s fine. We were here, we were here. We finished 13/26 relay teams in our division, in a cluster of teams that all finished between 6:30 and 7:00, and all three of us beat our individual time goals. I can’t be disappointed with a 3:48 on that course, especially considering that was a faster average pace than I biked the Olympic in 2012.

Serve me the sky with a big slice of lemon

As for the rest of the weekend: After getting my bike out of transition, I went to a Picky Bars-hosted happy hour and awkwardly chatted with four-time champ Jesse Thomas about which Picky flavors we ate on the bike. (Mine is Smooth Caffeinator, his is Need for Seed. If you were wondering.) (He was, for the record, incredibly nice. He asked how my race was, and I thought of the best possible answer only later, which was “Great! Almost twice as long as yours and we had three people doing it!”) There were beers. I hiked back to the campground, where there were more beers. At some point I discovered an Oreo in my jersey pocket and couldn’t remember where it came from. I found many, many uses for dollar store craft supplies.

And then Sunday, otherwise known as CryFest 2K14. We cheered for a couple of hours at the top of Lynch, making sure we saw all the TAG athletes go out on the bike course. Because of the huge gap between wave start times (about 1.5 hours between our first athlete and our last), we actually saw everyone go out on the bike AND most of the guys come in on the bike AND some of the guys head down to finish the run. After our first three women biked back down Lynch, we repositioned at the finish, where we then stood for the next couple of hours clapping these clapping hands as though they would actually will people across the line. 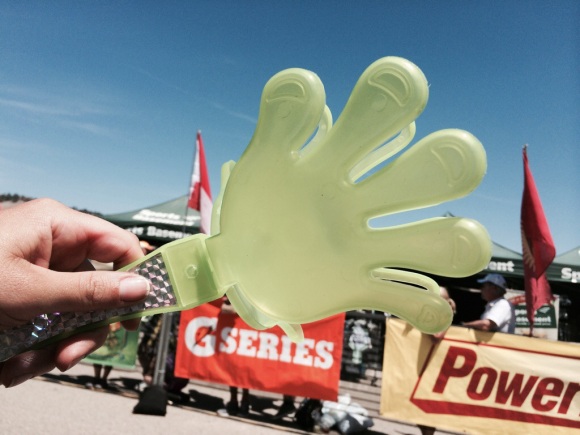 I’m sure the clapping hands were annoying to everyone around me, but I had nervous energy to burn and a lot of people to cheer in. I also had dollar store maracas, which I offered to anyone who started to whine about the clapping. If you can’t beat ’em, join ’em, right?

Everything after that isn’t really my story to tell, but almost everyone from our group finished strong and happy. There were high-fives, tears that weren’t mine, lots of hugs, so much cheering. Anyone who tells me triathlon is an individual sport has never been at that finish line.

I don’t know if I’ll go back next year. I said one more Wildflower, said I had to do it right to know if I was done. But doing it right just made it all that much harder to quit.

Italicized bits throughout are from The National’s “The Geese of Beverly Road,” which I had stuck in my head for all of Wildflower weekend, and which prompted more than one person to suggest that possibly my version of “pump-up music” was different from theirs.

Back in the Day

Things I Talk About